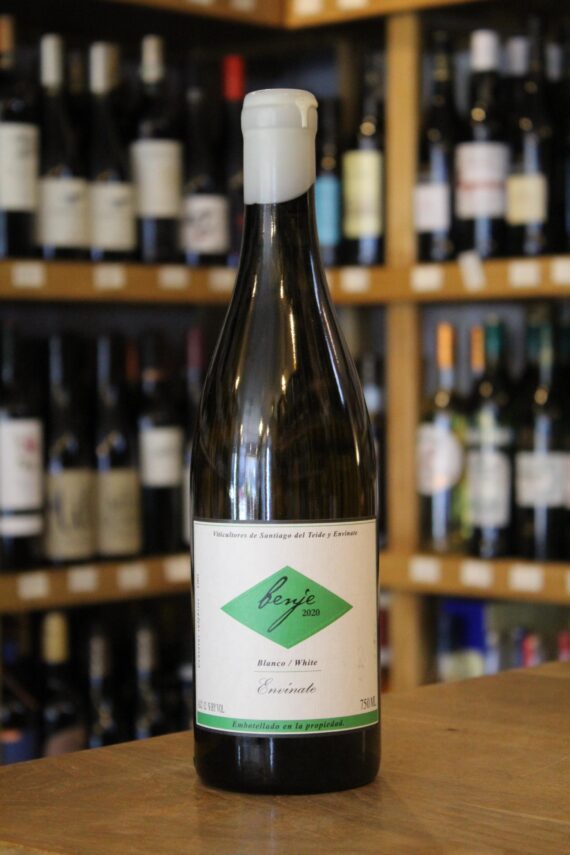 Characteristic volcanic smoky notes with an orchard fruit core. Brine and salt on the palate, paired with lively acidity.

The fruit for the Benje wines comes from vineyards in Santiago del Teide, high on the northwestern volcanic slopes of Tenerife. Altitude is around 1,000 metres. The climate is Atlantic with an average rainfall of 550 mm. This enables grapes to ripen to moderate alcohol levels while retaining freshness and good acidity.

Viticulture is organic. The soil is worked by hand without using any kind of chemicals. The vines are free-standing, completely untrained. The main challenges to viticulture are winds from the Atlantic and Africa and fluctuations in humidity. Harvesting is done by hand.

Each parcel is vinified separately, in a mix of concrete tanks and open tubs. 75% of the fruit is pressed directly off the skins, the other 25% undergoes skin contact for between 14-40 days. The wine is aged for 8 months in 60% concrete and 40% old French barriques, on the fine lees. No battonage or sulfur is used. It is clarified using a little Bentonite, and bottled unfiltered.

Envínate (aka wine-yourself) is the brainchild of Laura Ramos, Jose Martínez, Roberto Santana and Alfonso Torrente, four friends who met while studying oenology at the University of Miguel Hernández in Alicante. They focus on exploring the ancient, Atlantic-influenced terruños of Ribeira Sacra, The Canary Islands and Almansa. Their philosophy is simple: let each parcel fully express itself through traditional farming and wine-making methods. Right now there are four different projects under the Envínate umbrella: Lousas overseen by Alfonso Torrente in Ribeira Sacra, Táganan and Benje by Roberto Santana in Tenerife, and Albahra in Almansa by Laura Ramos and José Martínez. These are some of Indigo’s most unique and special wines, and some are only made in tiny quantities, so grab them while you can!