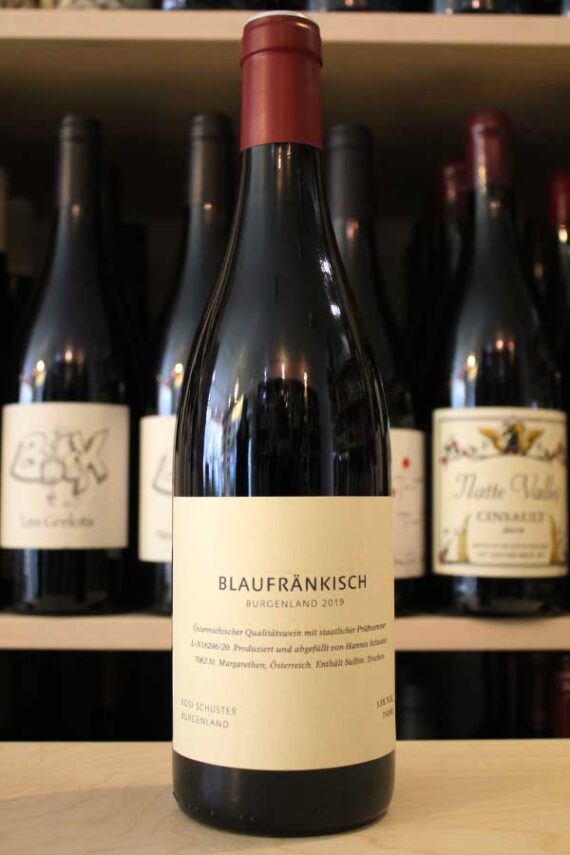 A wickedly drinkable Austrian red and pitch-perfect example of Blaufrankisch.

The story of Weingut Rosi Schuster starts back in 1979 when a young female winemaker, Rosi Schuster, and her partner Franz, decided to work on a mere 3 hectares in and around their home village Sankt Margarethen on the western shores of Neusiedlersee. Already in 2000, whilst at viticulture school, Hannes Schuster started experimenting with small batches of Chardonnay and Sankt Laurent at the family estate. In 2007, after having supported his parents the years before, Hannes eventually took over the reigns at the now 14 hectare ‘large’ winery and a couple of years later completed the conversion to organic farming.

His love and affection for old Austro-Hungarian varieties manifested in the early days of his work, which meant purely focusing on native Blaufränkisch, Sankt Laurent as well as white field blend vineyards and an increasing amount of old-vine Grüner Veltliner and Furmint. Hannes is a silent fighter for a redefinition of the Burgenland as a whole – championing a low-tech, hands-off approach in the vineyards and the cellar. However, beyond the pursuit for a ’new old’ style he has always put quality and an appreciation for old- vines on top of his philosophy.

Year after year he is proving this approach in his wines which comes through in the precision and purity hardly achieved in Austria today. His single vineyard interpretation of both Sankt Laurent and Blaufränkisch are made with an eye for longevity whilst respecting balance and freshness, mirroring the character of the vintage every single time. Watch out for special releases named after the villages ‘Sankt Margarethen’, ‘Zagersdorf’, ‘Müllendorf’ and ‘Deutsch-Schützen’ as these represent the very best bottlings in Hannes’s views each year.