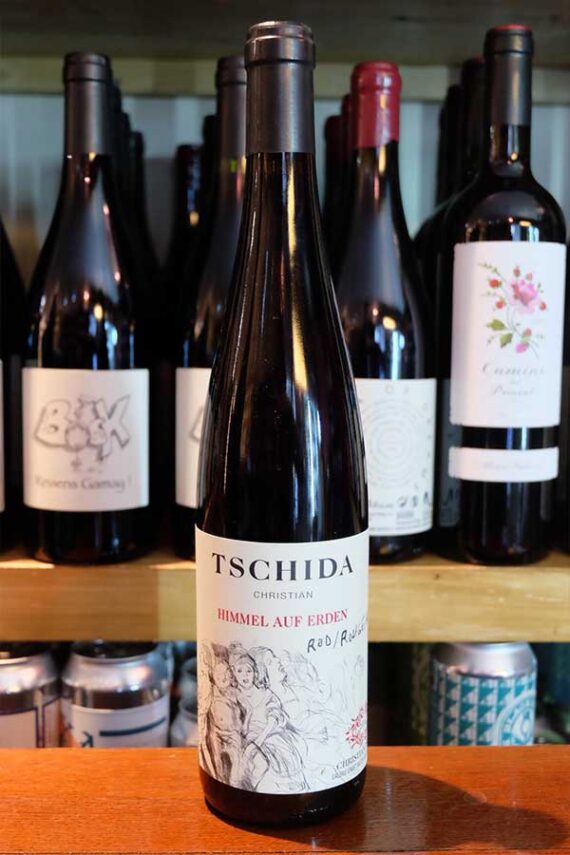 Christian’s second vintage of Himmel Auf Erden Red – the blend was almost the same however there was also a small proportion of Cabernet Franc mixed in.  Vinification with very gentle manual punch downs during maceration and minimal intervention throughout fermentation and aging. Maceration usually for 3-5 weeks then aged in large 1600l-2000l used Stockinger barrels and bottled unfined and unfiltered. Old vineyards in Christian’s home village Illmitz trained under the traditional double root system. The natural competition allows for slow growth and loose grape bunches that keep low alcohol levels even in warmer vintages like 2015, but increase concentration and flavour – delays the ripening by around two weeks, giving two more weeks of ‘hang time’ to build up flavour. Never racked. No fining, filtering, SO2. Label by Alfred Hrdlicka, famous Austrian sculpturist that died in 2009.

Christian Tschida started his career long before he ever bottled wines under his own label. In fact, for a long time Christian was experimenting with different techniques, methods and vessels long before the ’natural movement’ was widely established in Austria. The Tschida family is a long-lasting legacy of winemakers in the village of Illmitz on the Eastern shores of Neusiedlersee. In addition to his family vineyards, Christian has also invested in new (and old) vineyards in the village of Purbach located on the opposite side of the lake within the Leithaberg mountain range.

In total, Christian owns around 14 hectares of vineyards on both sides of the lake working with a vast variety of indigenous grapes as well as personal favorites such as old-vine Cabernet Franc and Syrah on pure limestone. Christian’s perfectionist approach is apparent in both vineyards and cellar. Christian’s biggest investment are his vineyards. Each year he and his father would bring out compost and straw from the nearby lake to consistently cover the soil from the heat and therefore keep the vineyards moist and balanced. His vertical press (the only technical tool he uses) imitates the pressure of a handshake, meaning that only the brightest and purest juice is used. In the cellar Christian now works with large barrels ranging from 1000 to 3000L in size which to him give the ideal balance of freshness and maturation.

His creativity and love for experimentation is often resembled in his passion for art and label design (being a graphic designer by train). Next to his beautiful Himmel Auf Erden collection, he has recently released one-off art labels such as Abra Ka Dabra, Birdscape and Brutal!, a special friendship release with the team behind Bar Brutal in Barcelona.